This is a post introducing a Graph Markov Network structure for dealing with spatial-temporal data forecasting with missing values.

Traffic forecasting is a classical task for traffic management and it plays an important role in intelligent transportation systems. However, since traffic data are mostly collected by traffic sensors or probe vehicles, sensor failures and the lack of probe vehicles will inevitably result in missing values in the collected raw data for some specific links in the traffic network.

Here, the superscript of a traffic state represents the spatial dimension and the subscript denotes the temporal dimension.

The short-term traffic forecasting problem can be formulated as, based on -step historical traffic state data, learning a function to generate the traffic state at next time step (single-step forecasting) as follows: 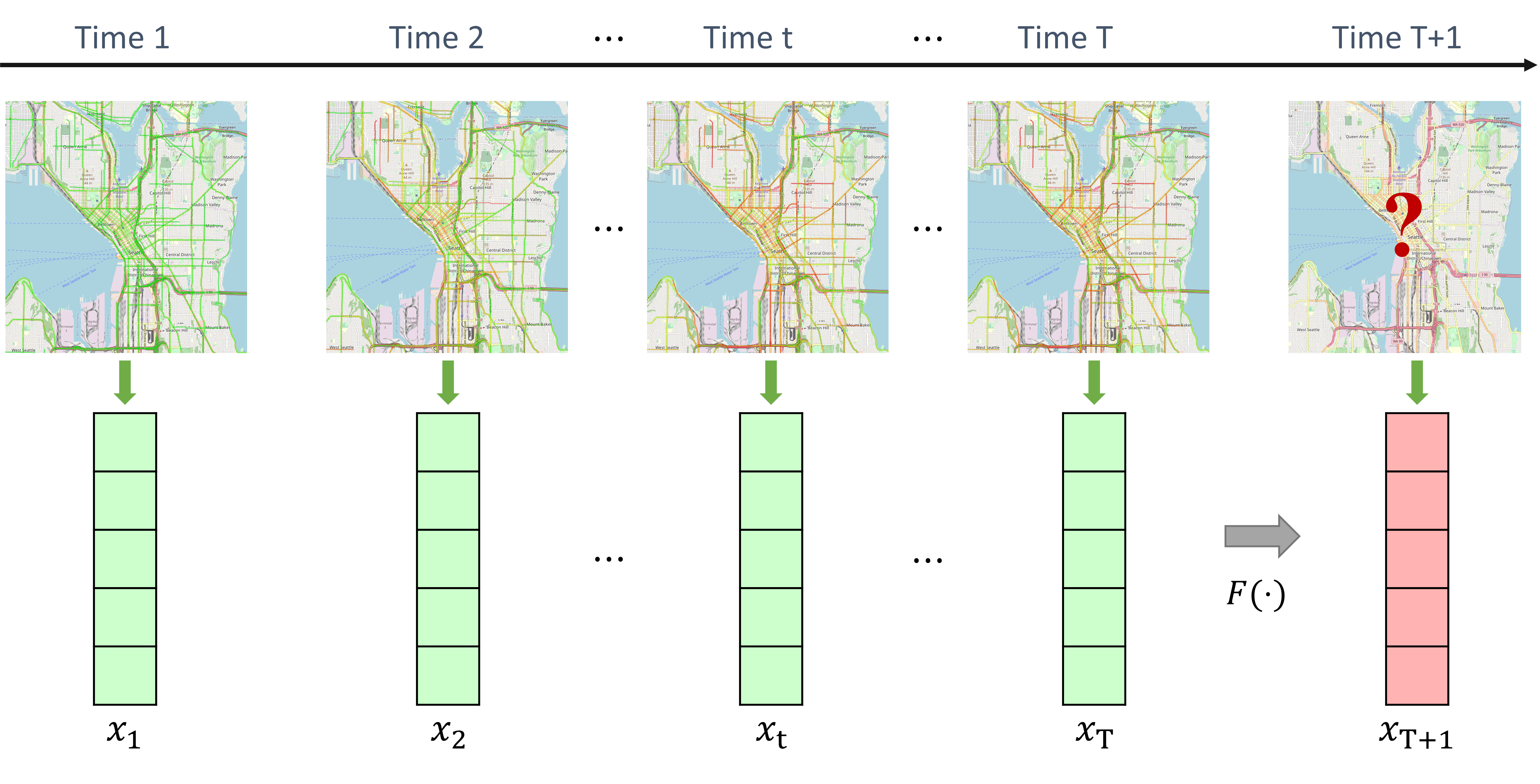 Learning Traffic Network as a Graph

Given the graph representation of the traffic network, the traffic forecasting problem can be reformulated as

Taking the missing values into consideration, we can formulate the traffic forecasting problem as follows

A traffic network is a dynamic system and the states on all links keep varying resulted by the movements of vehicles in the system. We assume teh transitions of traffic states have two properties

Markov Property: The future state of the traffic network depends only upon the present state , not on the sequence of states that preceded it. Taking as random variables with the Markov property and as the observed traffic states. The Markov process can be formulated in a conditional probability form as

where demonstrates the probability. It can be formulated in the vector form as

where is the transition matrix and measures how much influence has on forming the state .

Graph Localization Property: We assume traffic state of a link 𝑠 is mostly influenced by itself and neighboring links. This property can be formulated in a conditional probability form as

where the superscripts and are the indices of graph links (road links). The denotes a set of one-hop neighboring links of link and link itself. Its vector form can easily represented by

Graph Markov Process: By incorporating the Markov property and the graph localization property, the traffic state transition process is defined as a graph Markov process (GMP) formulated in the vector form as

where is the Hadamard (element-wise) product operator that .

where is the inferred part. Because ,

Applying the expansion of , the transition process becomes

After iteratively applying steps of previous states from to , can be described as

where , , and are the summation, matrix product, and Hadamard product operators, respectively. For simplicity, we denote the term with the as , and the GMP of the complected states can be represented by

When is large enough, we consider is a negligibly term.

The graph Markov process can be demonstrated by the following figure. The gray-colored nodes in the left sub-figure demonstrate the nodes with missing values. Vectors on the right side represent the traffic states. The traffic states at time $t$ are numbered to match the graph and the vector. The future state (in red color) can be inferred from their neighbors in the previous steps.

The graph Markov network (GMN) is designed based on the graph Markov process, which contains transition weight matrices. The product of the these matrices measures the contribution of for generating the . To reduce matrix product operations and at the same time keep the learning capability in the GMP, is simplified into , where is a weight matrix. In this way, can directly measure the contribution of for generating the and skip the intermediate state transition processes. Further, the GMP still has weight matrices (), and thus, the learning capability in terms of the size of parameters does not change. The benefits of the simplification is that the GMP can reduce times of multiplication between two matrices in total. The is considered small enough and omitted for simplicity.

Based on the GMP and the aforementioned simplification, the Graph Markov Network for traffic forecasting with missing values can be defined as

where is the predicted traffic state for the future time step and are the model’s weight matrices that can be learned and updated during the training process.

Structure of the graph Markov network is shown below. Here, .

The code for implementing the GMN is published in this GitHub Repo.

For more details of the model and experimental results, please refer to